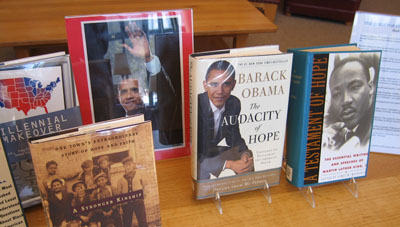 The Quest for Citizenship in the Americas –  this year’s theme for Black History Month –  is the inspiration for a book display now on view in the Baker Reading Room.  Library Assistant Meredith MacLeod has assembled a wide range of books that inform and illuminate this powerful and resonant theme.

Each year, The Association for the Study of African American Life and History chooses a theme for Black History Month. This year’s theme celebrates the 100th anniversary of the founding of the NAACP.  The ASALH website offers this description of the theme:

A century ago, an interracial group of Americans joined together and formed the National Association for the Advancement of Colored People (NAACP).  Two generations after emancipation, a tide of racism had betrayed the promise of first-class citizenship. In the South, whites had stripped Blacks of the right to vote and constructed a society based on racial segregation.  In the North, African Americans confronted myriad forms of discrimination that thwarted their aspirations.  The Supreme Court turned a blind eye to the denigration of American citizenship taking place across the land and in the government itself.

The story of the NAACP is the story of struggle to create and maintain equal citizenship for all Americans.  Through exposing the horrors of lynching, keeping the issue of equality before the courts, and organizing branches throughout the country, the NAACP drew a national following and inspired others to form organizations for racial change.  The NAACP’s work gave hope not only to blacks in the North, but to men and women in the South like Rosa Parks and Medgar Evers.

The centennial of the NAACP is an occasion to highlight the problem of race and citizenship in American history, from the experiences of free Blacks in a land of slavery to the political aspirations of African Americans today. The centennial also provides an opportunity to explore the history of other nation’s in the Americas, where former slaves also sought the fruits of citizenship.

The books assembled cover a wide range of subjects around the theme, and make for a rich exploration of what it means to strive for equal citizenship – throughout the history of America as well as today.  Take time to browse through the books and consider reading one of these titles in celebration of Black History Month this year.