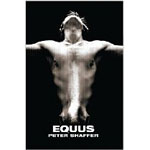 Have you read Equus by Peter Shaffer?

By now, most students have noted that Daniel Radcliffe, star of the popular Harry Potter films, has assumed the haunting role of the tortured stable boy in the Broadway production of  Equus, written by Peter Shaffer.

In this fascinating 1973 play, a psychiatrist works closely with a boy hospitalized because he has brutally blinded several horses with a metal spike.  While trying to reorient the boy through psychotherapy, the  doctor is anguished by his realization that in order to normalize the boy, he must also deprive him of his unconstrained passion and what has become a sort of mythic religion to the boy.  The doctor begins to envy the boy’s obsession because it is so potent, so magical, so intense … and also so unlike the mundane, passionless life that the doctor’s existence has become.  We are left to consider the question of what psychotherapy heals and what it unleashes.

The collected plays of Peter Shaffer ( Includes Equus and Amadeus for which Shaffer won a Tony Award).  Find it in Ohrstrom at:  822 SH1C.