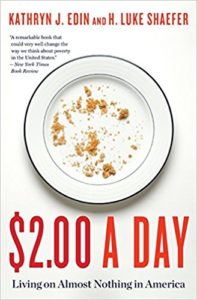 $2.00 a Day: Living on Almost Nothing in America– Kathryn J. Edin and H. Luke Shaefer

Edin and Shaefer chronicle the unintended consequences of the 1996 welfare reforms meant to encourage employment and reduce reliance on government cash payments. The reforms have been modestly successful for poor people who are employed. However, for those who are unable to get in or stay in the workforce, life is harsher than ever. The number of individuals in America who survive on less than $2 per person per day, the World Bank standard for global poverty, is growing. It means being inadequately fed, inadequately housed, and underemployed or unemployed. – Library Journal (02/01/2016) 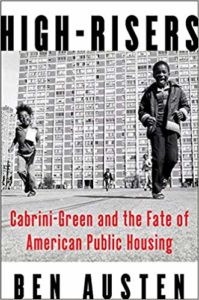 In his first book, journalist Austen traces the birth, life, and death of one of America’s most notorious public housing projects: the Cabrini-Green towers and row houses of Chicago’s Near North Side. Constructed in the 1940s and 1950s as a New Deal solution to Chicago’s overcrowded tenements, Cabrini-Green was intended for carefully screened working-class families. Initially integrating many different races, the neighborhood quickly became predominantly African American. Never adequately funded, Cabrini-Green’s structural needs were soon neglected and it became housing of last resort for the city’s poor. By the 1980s, Cabrini-Green was a national symbol of entrenched poverty, gang violence, and community neglect. In 2010, the towers were forcibly emptied and demolition began. Austen’s intimate portrait of the neighborhood follows individual residents from the halcyon days of sparkling new construction and optimism to the final hours before demolition. He draws on interviews with residents, staff, and public-housing experts, as well as contemporary news coverage, popular culture, and secondary literature. -Anna J. Clutterbuck-Cook, Massachusetts Historical Soc. (Library Journal (12/01/2017) 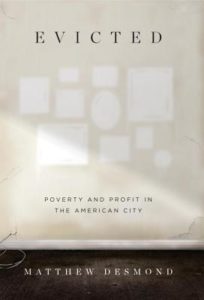 Evicted: Poverty and Profit in the American City – Matthew Desmond

A groundbreaking work on the central role of housing in the lives of the poor. Based on two years (2008-2009) spent embedded with eight poor families in Milwaukee, Desmond delivers a gripping, novelistic narrative exploring the ceaseless cycle of “making rent, delaying eviction, or finding another place to live when homeless” as experienced by adults and children, both black and white, surviving in trailer parks and ghettos. “We have failed to fully appreciate how deeply housing is implicated in the creation of poverty,” writes the author. Once rare, eviction is now commonplace for millions of Americans each year, most often as a result of insufficient government support, rising rent and utility costs, and stagnant incomes. Their frantic experiences–they spend an astonishing 70 to 80 percent of their incomes on rent–make for harrowing reading, interspersed with moving moments revealing their resilience and humanity. “All this suffering is shameful and unnecessary,” writes Desmond, who bolsters his stories with important new survey findings. He argues that universal housing vouchers and publicly funded legal services for the evicted (90 percent lack attorneys in housing courts) would help alleviate this growing, often overlooked housing crisis. This stunning, remarkable book–a scholar’s 21st-century How the Other Half Lives–demands a wide audience.  Kirkus Reviews (12/15/2015) 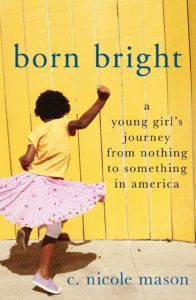 Mason (Me First: A Deliciously Selfish Take on Life) provides a sobering account of the struggle of growing up in poverty in 1970s Southern California. Born to a teenage mother and mostly absent father, Mason here details the ongoing trials her family endured in finding basic necessities such as housing and food. Raised in neighborhoods with mostly African American families like her own, the author shares the sense of isolation she felt from the more affluent parts of society. Included in Mason’s candid anecdotes are the challenges she faced in completing the college application process, and how this nearly blocked her entry into post-secondary education. From inequalities in public school funding to a dysfunctional criminal justice system, she offers her take on cultural barriers to economic parity. Mason, now a respected voice on socioeconomics, also delivers her views on how to improve life for marginalized Americans. Works such as Sasha Abramsky’s The American Way of Poverty: How the Other Half Still Lives offer studies of economic disparity but without the compelling personal perspective. VERDICT This firsthand account of a passage out of poverty will inspire readers interested in the strength of the human spirit in overcoming formidable obstacles.–Mary Jennings, Camano Island Lib., WA – Library Journal (06/15/2016) 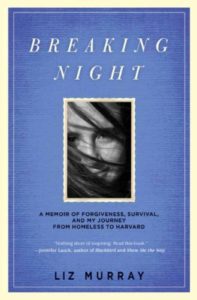 Breaking Night: a memoir of forgiveness, survival, and my journey from homeless to Harvard – Liz Murray

Murray is the daughter of drug addicts who died of Aids. They neglected her, scandalously, but loved her in their own hopelessly dysfunctional way. By the age of six she was accustomed to watching her parents shoot up (her mother was almost blind, so her father had to help her do it). She left home at 15, carrying with her a crumpled snapshot of her mother, taken at a similar age – a girl with a storm cloud of hair and an unnervingly absent stare. It is the only picture reproduced in the book – her talisman. Murray’s mother was dying of Aids while her daughter rode the subways at night for warmth, slept in stairwells on marble floors, camped in friends’ houses, scavenged in rubbish bins and played truant from school. And, at 17, she motivated herself to return to high school – making up a year’s work with every term. Murray set herself the highest goals and won a New York Times scholarship that led to the place at Harvard. By far the most memorable stretches of the book are those describing the squalid particulars of the family flat in the Bronx. By the time you have envisaged the coffee table strewn with her mother’s knickers, her parents’ blood on the walls and the Wonder Bread, the lice having a field day on her head, you are desperate to read about scouring, clean water and gallons of shampoo. Murray describes hunger vividly, too – she and her sister, on one occasion, share toothpaste and a cherry flavoured chapstick to keep them going. At every turn, what one salutes is Murray’s unjudgmental stoicism, her compassion and lack of self-pity. One gets the sense she has spent her life trying not to rock the boat – and is still aiming for calm waters. She won’t let misery win. – Kate Kellaway – The Guardian