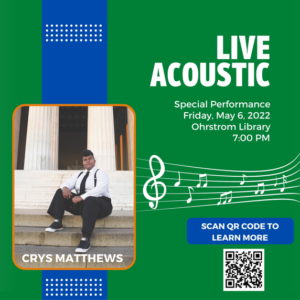 We are very excited to welcome folk singer Crys Matthews to Millville, this Friday May 6th at 7:00 PM on the Ohrstrom Library terrace. Considered one of the brightest stars of the new generation of social justice music-makers, Crys writes and sings songs of “compassionate dissent” that reflect her own lived experiences as, what she calls, “the poster-child for intersectionality”.

Matthews began performing in 2010, but her true breakout came when she won the grand prize at the New Song Music and Performance Competition in 2017. That year she also released two projects—The Imagineers, an album of thoughtful songs on love and life, and Battle Hymn for an Army of Lovers, which tackles social justice themes. In her TedTalk about difficult conversations called “Sing, Don’t Shout—An Alternative Approach”, Matthews spoke about being born and raised in a small town in southeastern North Carolina by an A.M.E. preacher, and how she witnessed the power of music from an early age.  Matthews is now using her voice to answer Dr. Martin Luther King’s call to be “a drum major for justice.”

“I believe in hope,” Matthews said. “As a social-justice songwriter, it is my duty to keep breathing that hope and encouragement into the people who listen to my music.” Her latest album Changemakers does just that. Matthews hopes that “these songs will serve as a time capsule, a record of the events of the last four years and what it was like to live through them.”

Listen to Crys below, and then join us on Friday to hear more from this powerful artist for change and justice.