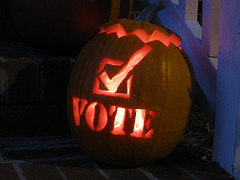 Even with less than a week left until Election Day it’s still not too late to learn about the presidential candidates.

Are you 18 and old enough to vote?
Are you still undecided?
Do you want to learn more about the presidential campaign?

The print magazine collection at Ohrstrom Library contains a wealth of information and articles on the presidential campaign.  Ohrstrom Library maintains subscriptions to numerous weekly news magazines which closely follow the campaign.  You can spend time browsing Time, Newsweek or US News & World Reports.  Maclean’s Magazine will provide a Canadian view of the US elections, while The Spectator, published in the United Kingdom, offers a British take on things.

Ohrstrom Library has print magazines to suit everyone’s political views.  Below are three titles that you can find in the periodicals room at Ohrstrom.  The short descriptions were taken from the 2008 edition of Magazines for Libraries (Ref. 016 K15 2008).

“The Nation is a decidedly liberal publication.” (p. 723)

“The New Republic is pretty much the closest you can come to objective coverage of Washington from an insider’s perspective.” (p. 724)

“National Review is most certainly a conservative voice on current issues and news.” (p. 724)

Get informed and be sure to vote on Tuesday, November 4th!

Image courtesy of Clubjuggler under this Creative Common license.