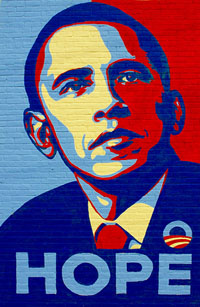 In honor of the historic Inauguration of the 44th President of the United States, the staff at Ohrstrom Library has assembled a display of related materials.

Please take a moment during the next week or two to learn about other Presidential inaugurations in such books as The inaugural addresses of twentieth-century American presidents edited by Halford Ryan (353.03 In1R) and Lincoln’s greatest speech: the second inaugural by Ronald C. White Jr. (Big. L638W5).   Listen to the actual voice of FDR give three of his inaugural addresses on the recording FDR: nothing to fear (CD Biog.  R6772).

Learn more about what experiences have shaped and inspired our new president by reading Obama’s  The audacity of hope: thoughts on reclaiming the American dream (973.931 Ob1A) as well as the DVD Senator Obama goes to Africa (DVD Biog. Ob1S).

Finally, enjoy some recordings of two of the featured performers at the inauguration: Aretha Franklin [The Best of Aretha Franklin (CD 785.42 F85)] and John Williams [John Williams greatest Hits, 1969-1999 (CD 782.85 W67).]  All of these items and many more are on display in the Baker Reading Room.

Image courtesy of Jetheriot under this Creative Commons license.