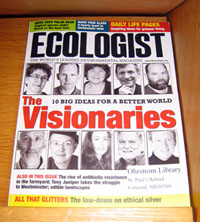 In honor of the upcoming Earth Day Celebration Ohrstrom Library would like to highlight two environmental magazines in the periodicals collection.  First up is The Ecologist, a magazine that proclaims itself to be “The world’s leading environmental magazine”.   The Ecologist is published in London, but it features articles that are universally relevant.  In the April issue, “Sick as a pig” focuses on the rise in antibiotic resistance that is being transferred from farm animals to humans.  Another article, “Possum or polar bear” cautions that polar bears are not the only species facing threats from global warming.  In fact, there are many tropical species suffering from rising global temperatures.  The Ecologist is published ten times a year, and an online version is available at www.theecologist.org. 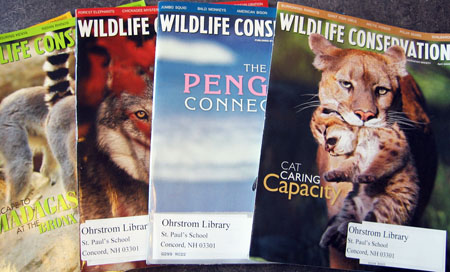 Wildlife Conservation published by the Wildlife Conservation Society is another interesting environmental magazine available in the Library.  Published six times a year, it features articles detailing on-going research and conservation efforts worldwide.  Articles from the most recent issue include “The Great Barranquero City of El Condor”  which details efforts to save the nesting area of the world’s largest parrot colony along the South Atlantic shore in Argentina.  In “The secret family life of cougars” you can read about scientists who are using GPS technology and DNA analysis to track the movements of cougar “families”.

Take a moment and browse the back issues of these two journals.  Both are filled with thought provoking articles and stunning photography.