When the weather gets frosty, why not head to Ohrstrom and dive into our new and featured poetry books? These three titles will get you thinking about topics including…

The nature of language:

“Archeophonics is the first collection of new work from the poet Peter Gizzi in five years. Archeophonics, defined as the archeology of lost sound, is one way of understanding the role and the task of poetry: to recover the buried sounds and shapes of languages in the tradition of the art, and the multitude of private connections that lie undisclosed in one’s emotional memory. The book takes seriously the opening epigraph by the late great James Schuyler: “poetry, like music, is not just song.” It recognizes that the poem is not a decorative art object but a means of organizing the world, in the words of anthropologist Clifford Geertz, “into transient examples of shaped behavior.” Archeophonics is a series of discrete poems that are linked by repeated phrases and words, and its themes and nothing less than joy, outrage, loss, transhistorical thought, and day-to-day life. It is a private book of public and civic concerns.” (National Book Award website)

The language of conflict: 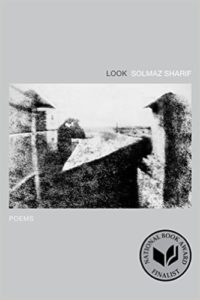 “Solmaz Sharif’s astonishing first book, Look, asks us to see the ongoing costs of war as the unbearable loss of human lives and also the insidious abuses against our everyday speech. In this virtuosic array of poems, lists, shards, and sequences, Sharif assembles her family’s and her own fragmented narratives in the aftermath of warfare. Those repercussions echo into the present day, in the grief for those killed in America’s invasions of Afghanistan and Iraq, and in the discrimination endured at the checkpoints of daily encounter.
At the same time, these poems point to the ways violence is conducted against our language. Throughout this collection are words and phrases lifted from the Department of Defense Dictionary of Military and Associated Terms; in their seamless inclusion, Sharif exposes the devastating euphemisms deployed to sterilize the language, control its effects, and sway our collective resolve. But Sharif refuses to accept this terminology as given, and instead turns it back on its perpetrators. “Let it matter what we call a thing,” she writes. “Let me look at you.” (Author’s website)

The conflict of religion: 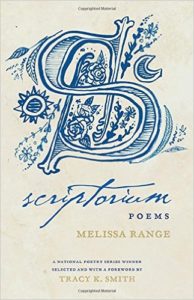 “The poems in Scriptorium are primarily concerned with questions of religious authority. The medieval scriptorium, the central image of the collection, stands for that authority but also for its subversion; it is both a place where religious ideas are codified in writing and a place where an individual scribe might, with a sly movement of the pen, express unorthodox religious thoughts and experiences. In addition to exploring the ways language is used, or abused, to claim religious authority, Scriptorium also addresses the authority of the vernacular in various time periods and places, particularly in the Appalachian slang of the author’s East Tennessee upbringing. Throughout Scriptorium, the historical mingles with the personal: poems about medieval art, theology, and verse share space with poems that chronicle personal struggles with faith and doubt.” (Publisher’s website)