Here is another selection of great books with great covers to be found on the New Book Shelves in the Baker Reading Room at Ohrstrom Library. 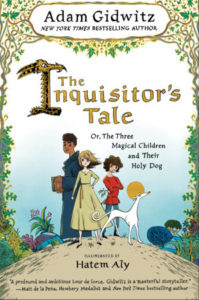 “What Gidwitz accomplishes here is staggering. ‘The Inquisitor’s Tale’ is equal parts swashbuckling epic, medieval morality play, religious polemic and bawdy burlesque, propelling us toward a white-knuckle climax where three children must leap into a fire to save…a Talmud. And yet, the rescue of this single book feels like higher stakes than any world-incinerating superhero battle. Part of this is because ‘The Inquisitor’s Tale’ is dense with literary and earthy delights, including Hatem Aly’s exquisite illustrations, which wrap around the text as in an illuminated manuscript.” —New York Times Book Review 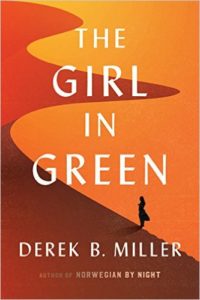 The Girl in Green by Derek B. Miller
Houghton 2017
Call Number: Fiction M61

“1991. Near Checkpoint Zulu, one hundred miles from the Kuwaiti border, Thomas Benton meets Arwood Hobbes. Benton is a British journalist who reports from war zones in part to avoid his lackluster marriage and a daughter he loves but cannot connect with; Arwood is a midwestern American private who might be an insufferable ignoramus, or might be a genuine lunatic with a death wish–it’s hard to tell. Desert Storm is over, peace has been declared, but as they argue about whether it makes sense to cross the nearest border in search of an ice cream, they become embroiled in a horrific attack in which a young local girl in a green dress is killed as they are trying to protect her. The two men walk away into their respective lives. But something has cracked for them both. Twenty-two years later, in another place, in another war, they meet again and are offered an unlikely opportunity to redeem themselves when that same girl in green is found alive and in need of salvation. Or is she?” (Amazon description) 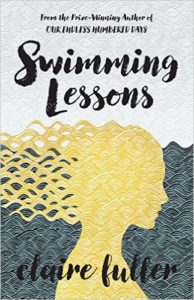 “A famous elderly author looks out the window of a bookstore and thinks he sees his deceased wife. Upset by this event, he takes a near-fatal tumble and winds up in the hospital. Flora, his youngest daughter, returns home to help care for him—shortly thereafter, letters from her mother will be discovered hidden inside the books of her father’s prized library. Thus begin two plot lines, as Flora and her sister care for their father, and as their mother’s letters lay out her side of the marriage—starting with their first meeting when she was a student and he was a professor. Is their mother dead now, or did she run away? And what other secrets are hidden inside the letters? Well-paced and finely detailed, Swimming Lessons is a mystery about an uncoiling family that will keep you turning pages and cause your loyalties to ebb and flow like a tide.” —Chris Schluep, The Amazon Book Review