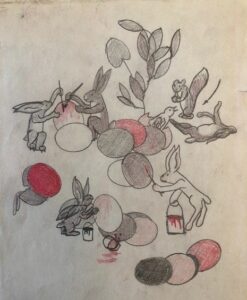 One of the things I like most about being an archivist is the feeling of excitement and discovery when I find something interesting, important, or fun in the records. That happened recently and was the inspiration for our current library exhibit, Letters Home, 1870 – Present.

I was working on a collection which contains multiple small donations from various alumni. The donations included things like photographs, books and publications, diaries, letters, and artwork. In fact, it was the artwork that caught my attention first – a folder full of sketches, drawn by Hugh Birckhead, Jr. You may recognize the name, as the Hugh Birckhead Memorial Lecture Fund is named in his honor.

Hugh Birckhead, Jr. was a member of the Form of 1932. After graduating from St. Paul’s School, he worked at the American Museum of Natural History, first as a volunteer and then as an employee, up until he joined the Army in April 1942. Even while he was in the service, he continued his studies of birds, sending letters home to his uncle, a fellow amateur ornithologist, about his discoveries. In fact, his work on Northwest African birds during this time was published in Audubon Magazine. Sadly, Birckhead was killed in action on November 13, 1944.

Birckhead’s letters and sketches were donated to the archives by his cousin, Winthrop Aldrich, Form of 1961, in 2006.  The study of birds was clearly Birckhead’s passion – even while he was in the midst of war, his letters to his uncle were filled with references to bird sightings. An excerpt from one letter reads: 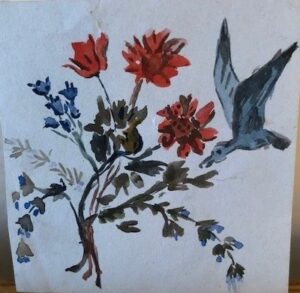 Thank you very much for your letter of June 22nd. I am glad to know that the eggs arrived safely. Those black soap boxes make splendid rigid containers and are impervious to water. They will make grand egg carriers to take out with us on future egging trips. I am much interested in all that I hear about the birds to be found around Tom and Frances’s new place. It is near Manchester, New Hampshire, isn’t it? Great country for hermit thrushes and blue-headed vireo’s eggs, both species which you have to collect for yourself for the first time, and just a days drive from loon country.  It is the queerest country, down here, that you can imagine as far as birds go. I have seen no more summer tanagers, but bob-white call in numbers from every field wherever we go, and I can hear them calling around the camp in the early morning, simply lying in my bed. I think I wrote you that I saw a blue grosbeak, a while ago, a very rare bird up North.

What really struck my fancy, however, was his sketches, which I showed to almost anyone who walked into the archives while I was working on them – whether they wanted to see them or not!  The drawings are delicate, fanciful, realistic – his natural talent shines through, especially when he is sketching birds. An unsigned tribute to Birckhead after his death said, in part: 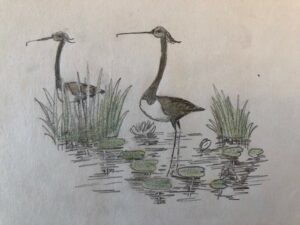 “Hugh’s passion was birds; with his beloved uncle, who shared this interest, he spent all his spare time roaming the countryside, collecting and studying every species of bird and egg. His heroes were Thoreau and Audubon. It is easy to see why. Hugh loved accuracy as well as beauty; in his drawings, watercolors, and wood-carvings, accuracy became beauty…His birds, painted with exquisite detail…seem alive, three-dimensional, poised for instant flight.”

I hope you will swing by the third floor gallery at the library to see some of his sketches for yourself, and then take a minute to enjoy our Letters Home exhibit. Birckhead is just one of eight panels displaying student and faculty letters, all of which give us a glimpse of life at St. Paul’s School through the years.