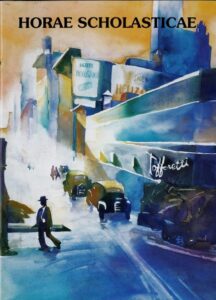 The Horae Scholasticae is the School’s oldest publication, having just celebrated its 160th anniversary in 2020.  The first issue was published on June 1, 1860.

The Horae Scholasticae is an important resource in understanding the early years of St. Paul’s School.  Each issue contained school news, athletic schedules and recaps, club and society notes, student literary work, and alumni news. A section called “Nugalia” (Latin for “stuff”, “triffles” or “nonsense”), contained tidbits of news, both practical and humorous. Under its literary iteration, the Horae Scholasticae became a showcase for student prose, poetry, artwork, and photography.

Back issues of the Horae Scholasticae can be found in the SPS Archives, both in bound editions and as individual issues.