Monday is Memorial Day.  St. Paul’s School has a long tradition of alumni/ae who have served in the armed forces, and throughout the grounds we have several memorials to those alumni who lost their lives in service to their country.  Their names are read every year during a Memorial Day gathering, the list starting with William Hall Turner, Form of 1861, who died in the Civil War. 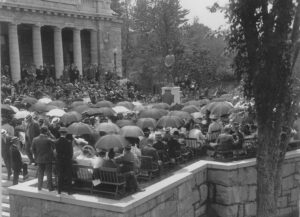 Dedicated in June 1906, the Spanish-American War Memorial stands on the terrace outside Sheldon. The statue of a young soldier was sculpted by Bela L. Pratt in 1903 and serves as a memorial to alumni who died in the Spanish American War. 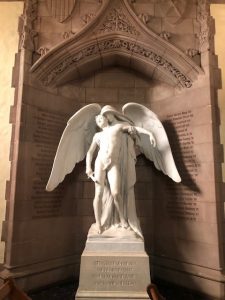 The chantry in the Chapel of St. Peter and St. Paul was erected in 1928 to contain the War Memorial and to serve as a baptistry.  The War Memorial, entitled “Death and the Wounded Soldier”, was created by Daniel Chester French. The figures are made of marble, set in a recess, and on the sides are carved the names of St. Paul’s graduates who lost their lives in World War One.  For more information, check out St. Paul’s School in the Great War. 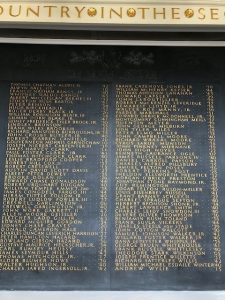 “In honor of the old boys of this school who died in the service of their country in the Second World War and in thanksgiving for the return of those who were spared”.

Memorial Hall, opened in 1951, was designed by Richard Kimball and intended as a lasting memorial to the 104 alumni who died during World War Two.  Their names are inscribed in the lobby.  Two additional memorial plaques have been added to the lobby over time, for the Korean War and the Vietnam War. For more information, check out St. Paul’s School in the Second World War. 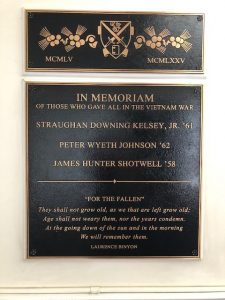 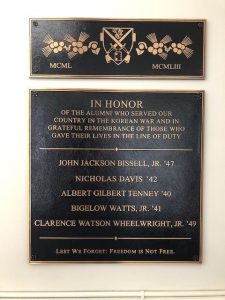 Join us in honoring our SPS alumni, as well as everyone who made the ultimate sacrifice in defense of our country.

“We all carry, inside us, people who came before us.”  — from The Cloud Atlas by Liam Callanan