The Ohrstrom librarians would like to extend our congratulations to the Form of 2022!  These last few weeks, the students have been partaking in the usual traditions: Exams, Senior Skip Day, Prom, and Day of Service – all leading up to this weekend’s graduation festivities.  After the ceremony, these Sixth Formers officially become Alumni/ae, with one important job remaining to commemorate their time at St. Paul’s School – deciding on their form plaque.

The form plaque is a long-standing tradition at SPS, an idea that originated in the early 1920’s between John Gregory Wiggins, a former SPS faculty member and accomplished wood carver, and Fourth Rector Dr. Samuel S. Drury.  Dr. Drury wanted the plaques to document school history and world events that occurred in the graduating years of each form.  Wiggins went on to carve 145 plaques for the school between 1921-1953.  His work has been carried on over the years by other talented carvers – Charles G. Chase ’26 (1954-1969), John Weidman (1970-1978), David Nugent (1979-1990), and Lisa Laughy (1990-present). 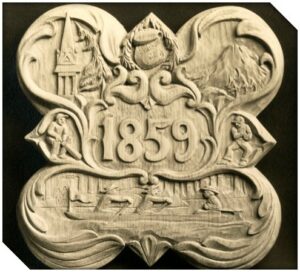 Each plaque is unique to the form year, They capture major world events, school milestones, buildings and grounds, retirements and deaths, athletic accomplishments, and more.  Each carver provided (with only a few exceptions) descriptions and explanations behind the symbols on the plaques they carved.  One of the earliest is for the Form of 1859.  Here is what Wiggins had to say about it:

“The lower section shows the first recorded boat-race on the School pond, when the “Emily” was defeated by the “Magnolia”, and the “Undine” by the “Sintram”.  Both races were for pair-oars with a coxswain. In the upper left-hand corner the Old Chapel tower is indicated, as during the Sixth Form year of this class the Old Chapel was consecrated. The upper right-hand corner shows a mountain top, as the entire School climbed Kearsarge this year. In both these panels the pines are shown bending before the wind, which prevailed very strong through the spring of this year. The corners of the shield show cricketers playing the game most popular in those days. This year the Olympians, the forerunners of the Old Hundreds, beat the Isthmians. The upper center shows a scroll indicating the first School diplomas (this was the first Form to graduate from S.P.S.).”

Form plaques can be viewed throughout the hallways and dining areas of Coit, as well as in the Friedman Community Center.  If you would like to learn more about the history of this interesting school tradition, see the Fall 2011 issue of the Alumni Horae: “Carving History” by Jana F. Brown.

Best of luck to the Form of 2022 – they all have bright futures ahead!  And we can’t wait to see your form plaque!