This year’s Anniversary Weekend celebration was something to behold!  Not only did we celebrate the 50th anniversary of the Form of 1972, but we also invited back the Forms of 1970 and 1971, which had their own 50th anniversaries curtailed due to the pandemic. In addition, we were pleased to welcome all forms ending in  0, 1, 2, 5, 6, and 7.  If you were here on the grounds, you know it was quite amazing!

Alumni/ae were able to participate in events like the rowing celebration, the coeducation celebration, the fun run, the annual parade, form photos, and the alumni boat races. There was also lots of social time and form dinners, as well as a memorial service to honor Interim Rector Clifford Gillespie, who passed away in 2021.

We were busy here at Ohrstrom Library all weekend.  We hosted an exhibit that featured our 50th anniversary forms, plus celebrations of the 50th anniversary of Coeducation and the 150th anniversary of Rowing at SPS.  In addition, the lobby featured selections from our Alumnus Author Collection and books on School history.  Many requested to see their yearbooks, and for one alumni, the issues of the Horae Scholasticae for years in which he was the editor. 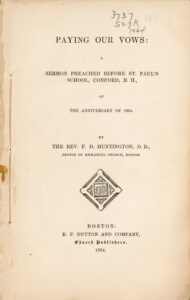 All of this busy excitement made us wonder – just how long has anniversary been going on?  St. Paul’s School opened in 1856.  The first form to graduate 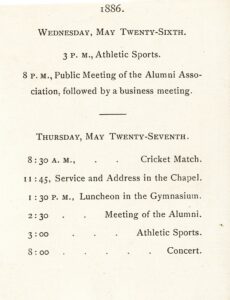 “The anniversary of St. Paul’s School for boys falls regularly on the Festival of the Conversion of St. Paul, January 25. It was postponed in this instance, to June 2, on account of changes occasioned by the enlargement of the buildings”.  The sermon was entitled “Paying Our Vows” and was preached by the Rev. F. D. Huntington, Rector of Emmanuel Church in Boston. 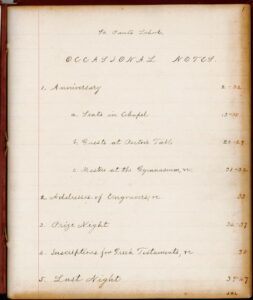 One last thing from the archives: a notebook from Second Rector Joseph Howland Coit, titled “Occasional Notes”, shows some early Anniversary planning. The Rector’s notes include directions for the boys, such as: “After the service the boys will see that their parents and friends are directed to the School Room in the School House that they may have an opportunity to pay their respects to the Rector”.  They also include seating charts for the luncheon, notes about the Chapel service, and notes for the “Masters” (faculty) for the weekend.

This notebook, now more than 130 years old, reminds us that the more things change, the more they stay the same – Anniversary weekend, then and now, takes a lot of planning and coordination!  So a final thanks to all who made this year’s Anniversary one for the archives!