September 18th -24th is Banned Books Week.  This year’s theme is “Books Unite Us. Censorship Divides Us.”, which is a theme that we here at the library can get behind!

So what is Banned Books Week? 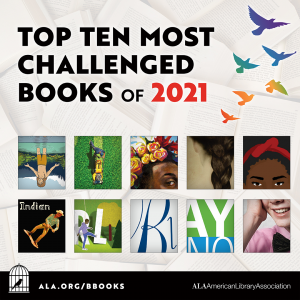 Banned Books Week, which is celebrated during the last week in September, is a yearly event celebrating the freedom to read. It promotes awareness of censorship issues and brings focus to the efforts of libraries, bookstores, teachers, and community members who speak out for readers everywhere. Banned Books Week highlights both current and historical attempts to censor books in libraries and schools. When a book is challenged, it means that there has been an attempt to remove or restrict it based upon the objections of a person or group. A banning refers to the removal of the title. In 2021, the Office for Intellectual Freedom (OIF) tracked 729 challenges to library, school, and university materials and services, affecting 1,597 books. The office also found that the demands to remove books primarily focused on titles that discussed racism and racial justice or those that shared the stories of Black, Indigenous, or people of color. Click HERE for the list of most challenged titles in 2021.

Many of the classics have been through a challenge or two, including To Kill a Mockingbird by Harper Lee, Fahrenheit 451 by Ray Bradbury, Beloved by Toni Morrison, and The Giver by Lois Lowry.

More recently challenged titles might surprise you – books like The Kite Runner by Khaled Hosseini, The Handmaid’s Tale by Margaret Atwood, The Curious Incident of the Dog in the Night-Time by Mark Haddon, All Boys Aren’t Blue by George M. Johnson, The Hate U Give by Angie Thomas, and Eleanor & Park by Rainbow Rowell.  Graphic novels have come under fire too, including Fun Home by Alison Bechdel, Maus by Art Spiegelman, Gender Queer by Maia Kobabe, and Habibi by Craig Thompson.

Scroll through our suggested title list and see which Ohrstrom librarians got caught reading a banned book!  Then after that, you know what to do – check out our displays in the library, pick up a banned book, and celebrate your own freedom to read!