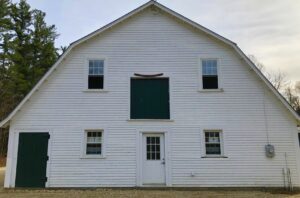 In December 2021, the SPS Facilities crew was tasked with emptying the Red Barn, located at the School’s entrance, in preparation for its upcoming renovation.  Much of the Red Barn’s contents was destined for the Tonka Barn, a former cow barn turned Facilities storage building, further up Dunbarton Road.

The Tonka Barn, however, was already full of School history and artifacts, thanks to the efforts of former and current Facilities staff members Fred Farwell, Scott Russell, and Matt Bailey, who spearheaded a long-term effort to preserve items related to School history.  Every time they would clean out an old building, barn, basement, or attic, they would find and save some interesting piece of furniture, artwork, artifact, or record that told a piece of the SPS story.

In 2006, in conjunction with the 150th Anniversary of SPS, their efforts were highlighted in a show at Hargate entitled Things Left in Barns: SPS History Revealed.  The show was cut short due to the Mother’s Day Flood that year but was resurrected a few months later at Anniversary in the AFC and then the following year in Schoolhouse.  In talking with Matt Bailey about the show, he said, “We were learning about School history as we found things. The best part of it was bringing these items out where people could see them, where they were being used rather than being stored in a barn somewhere.”

Ohrstrom’s new third floor exhibit, Things Found in Barns (Revisited), features some of the records and artifacts that have been “found in a barn” once again, saved during the Tonka Barn clean-out.  Coupled with existing pieces from the archives, they tell compelling stories and give us a glimpse into the history of St. Paul’s School.  After the exhibit, these items, along with many others, will be housed permanently in the Archives as the “Tonka Barn Collection”.

Here are just a few of the Tonka Barn treasures you will see: