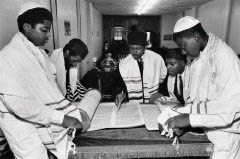 “The term African Diaspora refers to the dispersal of African peoples all over the world” (xxxiii).

Use this set to learn about the movement, forced and voluntary, of African people throughout several centuries.