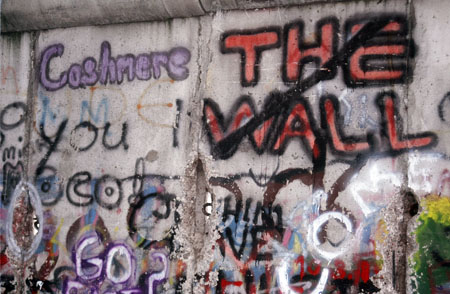 ASP Master Teacher Richard E. Schade, SPS 1962, has put together a multifaceted display in Ohrstrom Library on the subject of the Berlin Wall. The main level of the library in the Baker Reading Room features a display of books gathered from Ohrstrom’s own collection, accented with easel displays of photographs of the Berlin Wall taken by Schade. He has also printed a bibliography of the books in the display that is available as a handout.

The lower level of the library features a display wall with reproductions of periodical articles from the Library’s collection. Articles from Life, Newsweek, and other publications from the time of the wall’s creation provide a contemporary perspective of the world’s response to the division of East and West Berlin.

Schade has this to say of his display, titled “BERLIN STORIES: The Response of American Magazines To the Building of the Berlin Wall (1961)”:

The Berlin Wall came into being on August 13, 1961 and was breached on November 9, 1989. On the occasion of the 20th anniversary of the fall of the Wall, it is fitting to look back, even as its fall is commemorated.

Not only does the Ohrstrom Library have pertinent books on the history of the Berlin Wall, but its magazines provide reports with a sense of immediacy. In the same year as Maris and Mantle were locked in a home-run duel, Berlin was at the center of a major Cold War showdown; it at the brink of war between the United States and the Soviet Union over the status of Berlin.

Be sure to take in the displays in the Baker Reading Room and the lower level lobby on your next visit to Ohrstrom Library.

Photo of the Berlin Wall by Richard Schade.