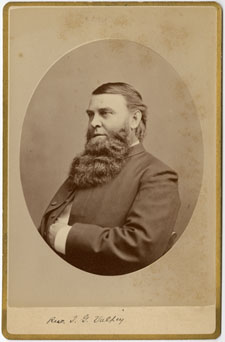 As the end of the School year approaches it will soon be time to tally up the academic standings and award the Valpey prizes.   These prizes get their name from the Rev. Thomas G. Valpey, a faculty member at St. Paul’s School from 1860 to 1868, and again from 1875 until his death in 1890.   Among his many bequests he left St. Paul’s School funds to establish an award of academic prizes each year.

While a teacher of Greek at St. Paul’s School, Valpey gained a reputation for being a thorough taskmaster.  Arthur Stanwood Pier’s St. Paul’s School 1855 -1934 relates that Valpey would give his students only a few seconds to recite a Greek declension, timing them with his watch.  He also had a habit of mumbling into his beard – described as “undoubtedly the most extensive beard that has ever been seen within the precincts of the school.”

At the beginning of the 2010-11 School year, the archives acquired two letters written by Valpey dated from 1860.  They were both written to William H. Anderson, a classmate of Valpey’s from Yale – Valpey graduated in 1858 and Anderson in 1859. There are not very many items in the archives from this early time of the school, and fewer personal letters, making these important additions to the collection. 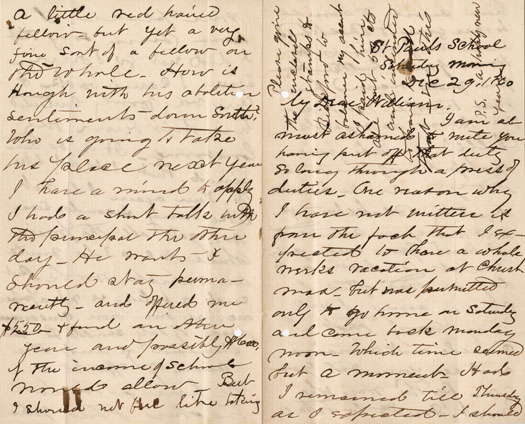 The letter shown above was written not long after Valpey came to SPS – in December of 1860.  He discusses the details of his daily life, his feelings of loneliness, and wanting to visit his friend.  But he also mentions being offered a permanent position at St. Paul’s, one that would provide the primary source of employment for him over the course of his life.

In addition to the fund for prizes at SPS, Pier lists a number of other donations that were part of Valpey’s will, including bequests to Concord Public Library, the Orphan’s Home,  and the Library at St. Paul’s School.   He characterizes Valpey’s intentions this way:

The terms of his will showed how genuine was his interest in promoting education, not only at St. Paul’s but elsewhere. . . It shows how earnest was the testator’s desire to contribute in every way he could to the intellectual and spiritual enlightenment of the communities with which he had been associated.

As with many traditions at St. Paul’s School, the Valpey prizes provide an opportunity for the students of today to connect with the people from the past who invested their ideals into the making of a great school. Congratulations to you all.