In the spirit of All Hallows’ Evening, the following excerpt from the October 31, 1925 edition of the Horae Scholasticae, called The Horae Owl, is reprinted below : 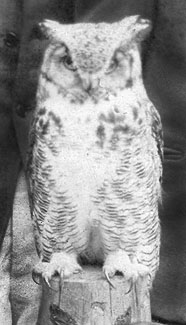 Ave, avis obscura! Hail, bird of darkness! Once more, high upon the cabinet, perches an owl and looks down at us with unblinking stare. By day he gleans the pages of past and future Horae and is acquainted far in advance with the guarded secrets of each issue. And when all the editors are deep in slumber he shrugs his shoulders, stiff from holding the same position all day, and coming into life and motion flies with powerful beats through the window, to float about on noiseless wings until morning, when he returns to his perch and folds his pinions about him and settles into his pose. Then to some editor seeking inspiration he whispers the tale of mystery he gathered in the night.

But fortunate bird, never hungry, never the “mousing owl,” for under thy feathers are no vitals, but merely stuffings. It was fated that the taxidermist should leave the brain, and under its guidance may the wisest path be chosen, and under the baleful glare of thy yellow eyes may the foolish one be avoided.

The Horae Owl refers to the taxidermy owl that appeared for many years in School pictures of the  Horae board. The board from the 1925 Horae, when this anonymous selection of prose was published, is shown below with their mascot.  The owl is the bird of Athena, Greek goddess of wisdom, and serves as a symbol for the literary pursuits of the Horae as well as the general spookiness associated with Halloween. 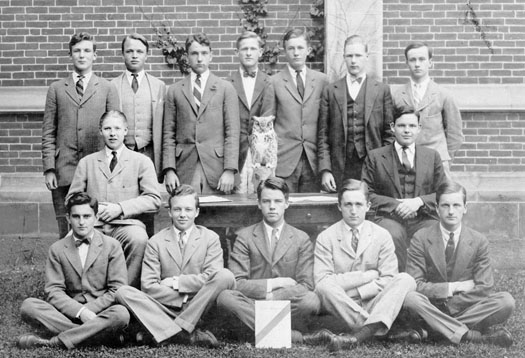