Spring Break is almost here, and there’s no better time to check out a book! Get lost in a novel, or learn something new from a nonfiction title. Copies are available in the library or online through the OverDrive website and OverDrive app. 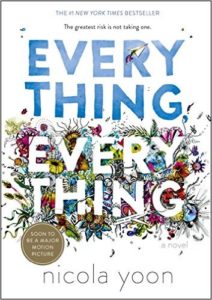 “Madeline Whittier is allergic to the outside world. So allergic, in fact, that she has never left the house in all of her seventeen years. She is content enough—until a boy with eyes the color of the Atlantic Ocean moves in next door. Their complicated romance begins over IM and grows through a wunderkammer of vignettes, illustrations, charts, and more.

Everything, Everything is about the thrill and heartbreak that happens when we break out of our shell to do crazy, sometimes death-defying things for love.” (Author’s website)

The Nix, by Nathan Hill 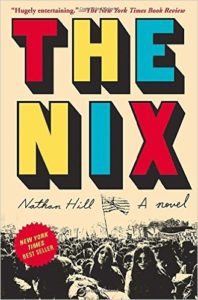 “It’s 2011, and Samuel Andresen-Anderson hasn’t seen his mother Faye in decades—not since she abandoned the family when he was a boy. Now she’s re-appeared, having committed an absurd crime that electrifies the nightly news and inflames a politically divided country. The media paints Faye as a radical hippie with a sordid past, but as far as Samuel knows, his mother was an ordinary girl who married her high-school sweetheart. Which version of his mother is true? Two facts are certain: she’s facing some serious charges, and she needs Samuel’s help.

To save her, Samuel will have to embark on his own journey, uncovering long-buried secrets about the woman he thought he knew, secrets that stretch across generations and have their origin all the way back in Norway, home of the mysterious Nix. As he does so, Samuel will confront not only Faye’s losses but also his own lost love, and will relearn everything he thought he knew about his mother, and himself.” (Publisher’s website) 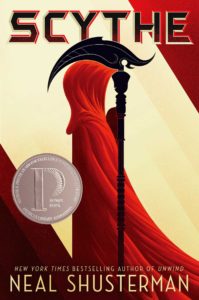 “Two teens must learn the “art of killing” in this Printz Honor–winning book, the first in a chilling new series from Neal Shusterman, author of the New York Times bestselling Unwind dystology.

A world with no hunger, no disease, no war, no misery: humanity has conquered all those things, and has even conquered death. Now Scythes are the only ones who can end life—and they are commanded to do so, in order to keep the size of the population under control. Citra and Rowan are chosen to apprentice to a scythe—a role that neither wants. These teens must master the “art” of taking life, knowing that the consequence of failure could mean losing their own.

Scythe is the first novel of a thrilling new series by National Book Award–winning author Neal Shusterman in which Citra and Rowan learn that a perfect world comes only with a heavy price.” (Publisher’s website) 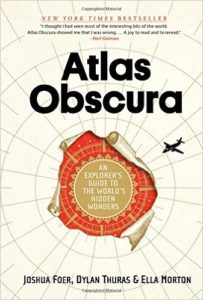 “…Talk about a bucket list: here are natural wonders—the dazzling glowworm caves in New Zealand, or a baobob tree in South Africa that’s so large it has a pub inside where 15 people can drink comfortably. Architectural marvels, including the M.C. Escher-like stepwells in India. Mind-boggling events, like the Baby Jumping Festival in Spain, where men dressed as devils literally vault over rows of squirming infants. Not to mention the Great Stalacpipe Organ in Virginia, Turkmenistan’s 40-year hole of fire called the Gates of Hell, a graveyard for decommissioned ships on the coast of Bangladesh, eccentric bone museums in Italy, or a weather-forecasting invention that was powered by leeches, still on display in Devon, England.

Created by Joshua Foer, Dylan Thuras and Ella Morton, ATLAS OBSCURA revels in the weird, the unexpected, the overlooked, the hidden and the mysterious. Every page expands our sense of how strange and marvelous the world really is. And with its compelling descriptions, hundreds of photographs, surprising charts, maps for every region of the world, it is a book to enter anywhere, and will be as appealing to the armchair traveler as the die-hard adventurer. Anyone can be a tourist. ATLAS OBSCURA is for the explorer.” (Amazon Description)

Grunt: The Curious Science of Humans at War, by Mary Roach 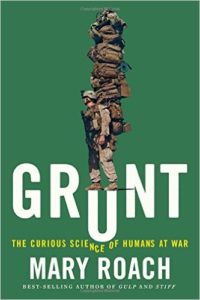 “Grunt tackles the science behind some of a soldier’s most challenging adversaries―panic, exhaustion, heat, noise―and introduces us to the scientists who seek to conquer them. Mary Roach dodges hostile fire with the U.S. Marine Corps Paintball Team as part of a study on hearing loss and survivability in combat. She visits the fashion design studio of U.S. Army Natick Labs and learns why a zipper is a problem for a sniper. She visits a repurposed movie studio where amputee actors help prepare Marine Corps medics for the shock and gore of combat wounds. At Camp Lemmonier, Djibouti, in east Africa, we learn how diarrhea can be a threat to national security. Roach samples caffeinated meat, sniffs an archival sample of a World War II stink bomb, and stays up all night with the crew tending the missiles on the nuclear submarine USS Tennessee. She answers questions not found in any other book on the military: Why is DARPA interested in ducks? How is a wedding gown like a bomb suit? Why are shrimp more dangerous to sailors than sharks? Take a tour of duty with Roach, and you’ll never see our nation’s defenders in the same way again.” (Amazon description) 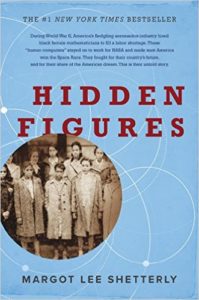 “Before John Glenn orbited the earth, or Neil Armstrong walked on the moon, a group of dedicated female mathematicians known as “human computers” used pencils, slide rules and adding machines to calculate the numbers that would launch rockets, and astronauts, into space.

Among these problem-solvers were a group of exceptionally talented African American women, some of the brightest minds of their generation. Originally relegated to teaching math in the South’s segregated public schools, they were called into service during the labor shortages of World War II, when America’s aeronautics industry was in dire need of anyone who had the right stuff. Suddenly, these overlooked math whizzes had a shot at jobs worthy of their skills, and they answered Uncle Sam’s call, moving to Hampton, Virginia and the fascinating, high-energy world of the Langley Memorial Aeronautical Laboratory.

Even as Virginia’s Jim Crow laws required them to be segregated from their white counterparts, the women of Langley’s all-black “West Computing” group helped America achieve one of the things it desired most: a decisive victory over the Soviet Union in the Cold War, and complete domination of the heavens…” (Amazon description)