Student publications have a long history at St. Paul’s School. They are interesting to study, as they give us a glimpse into different communities at SPS, and how they helped shape the School’s history.  We have copies of newsletters representing the Ballet Company, the Debate Team, the International Society, and more.  During Black History Month, I want to highlight the publications of the early Black student groups at SPS.

In 1968, the Afro-American Society was formed, which quickly became called the Afro-American Student Union. By 1976, it was called the Third World Coalition, to encompass not just Black students, but other minority students that were becoming part of the SPS community.  The name changed (again!) to the Third World Cultural Society and its mission expanded to welcome all who were interested in fostering a diverse community in Millville.

Several student publications were produced by these groups: 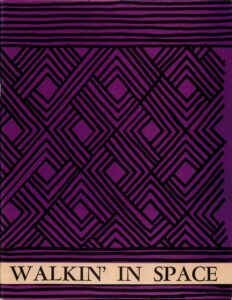 Walkin’ In Space was created by the Afro-American Student Union, with two issues published in 1970 and 1971.  These collections of prose, poetry, artwork, and photography were intended to foster an understanding of what it was like to be a Black student at St. Paul’s School.  The April 1971 issue stated the purpose of the Afro-American Student Union:

1) Unite and develop the brothers and sisters of St. Paul’s as a specific cultural and political entity within the school.

2) Attempt to create in non-Black people an awareness, understanding, and knowledge of Black people in America.

3) Maintain our own identity as Black people. 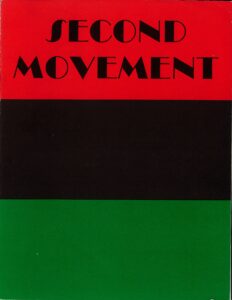 Second Movement was the third publication (1972) by the Afro-American Student Union.  In it, graduating Sixth Formers wrote about their experiences at St. Paul’s School and reflected on the role that the “Afro-Am” played in maintaining their Black identity. Wayne Gilreath, Form of 1974, wrote:

When I arrived at St. Paul’s School, the first friendships I made were with the Black students here, I’m sure many of the other new Blacks would say the same. Through these associations came not only new friends, but also a newer understanding of what being Black really means.

Being here, even for a short period of time, has created an awareness in me, an awareness of the Black situation here and in America. Now I would not be afraid to speak out anytime about any injustice. It is hard to describe on paper how one acquires these feelings. It’s just one of the things you learn as a Black student here. 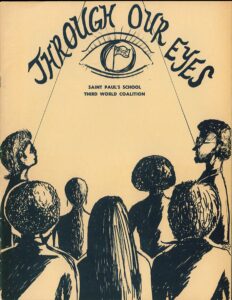 Through Our Eyes was first published in 1976, intended as a “look book” for incoming minority students.  It was produced by the Third World Coalition, an organization that addressed “the needs of the minority student, while also providing the community with an awareness of our cultures”. The magazine contained a collection of essays and photographs that reflected the minority student experience at St. Paul’s School.

Through Our Eyes is a collection of essays and photographs depicting the joys, sorrows, and hopes of the Third World Coalition of St. Paul’s School. We hope that through our efforts we can express to you our thoughts and feelings as minority students in a predominately white, academic institution. We also hope that you, as a prospective candidate for St. Paul’s, can absorb the wide variety of reflections expressed on these pages and use them to expand your knowledge of private boarding school life, as well as to give you another view of St. Paul’s as seen “through our eyes”.

A second collection, published in 1982, allowed students an opportunity to share their perspectives on the question: “What is it like to be a minority student at St. Paul’s School?”. Dennis Williams-Colon, Form of 1983, wrote:

If you come – it will hurt. You can be sure of that. Leaving everything you know and love for a small, cold New Hampshire town and a school full of unknown, upper-class whites can only hurt.

You can also be sure that you’ll gain so much from that decision that the initial pain will seem a ridiculously cheap price to pay. You’ll know exactly what you want from yourself – even if you come here, as I did, acting on a vague feeling of “maybe I should”; and you’ll grow: grow in so many different ways that for good or for bad, your stay at St. Paul’s will have been a major factor in your development as a person.

Subsequent issues of Through Our Eyes have been published as ISP’s, which has evolved into a literary magazine that showcases artwork, prose, poetry, and photography by both students and alumni/ae of color.  The latest edition of Through Our Eyes was published in 2020.  From the 1989 issue, a poem by Nysi Williams, Form of 1986, and artwork by Judy Liu, Form of 1989: 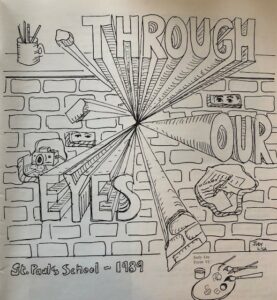 I am my person.

Copies of these publications are available in the archives, not just in February but all year round. Come by to study and enjoy this student work which represents an important piece of SPS history.