The New Year brings a new first for some SPS students: FIRST Robotics.  This will be the fifth year that the SPS team will compete in the Granite State Regional division of the national FIRST Robotics competition.  Last year’s team finished 3rd out of 48 individual teams, and took second place in the three-team alliance portion of the competition (read a full article about last year’s competition on the SPS website HERE).

Team leader Terry Wardrop has this to say about the competition:

“The St. Paul’s School Metal Vidsters FIRST Robotics team has just started the 2009 competition.  This year it is called Lunacy and involves creating a robot to solve a problem in an environment approximating that of the moon.  They have done this by creating a low-friction playing surface – we need to create a robot that can shoot a mini-basketball at a moving target while driving on a surface that is as slippery as ice!”

This year’s competition brings a new set of challenges for the team.  Each competing team receives a kit of parts and rules to the game their robot will compete in.  It’s up to the individual teams to design the most efficient robot to succeed in the game arena.  Take a look at this nifty clay animation video of the game rules for the 2009 competition: 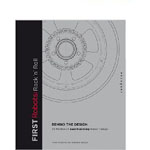 Ohrstrom Library has a strong collection of books on robotics, including FIRST Robots: Rack ‘n Roll (629.892 W64).  This book features profiles of 30 award-winning robot designs from the 2007 FIRST Robotics competition, and is itself a tribute to great design with a hidden magnetic closure and a mirror-like metallic finish on the page edges.  Other books on robotics can be found on the shelf in the upper stacks, reference, and the DVD collection at 629.892.

Best of luck to the SPS Robotics team over the next few weeks as they build their robot for the upcoming competition.