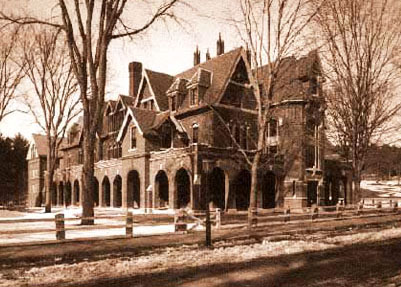 Forty eight years ago tonight The Big Study mysteriously caught fire and burned to the ground.  The Big Study was located across from the Rectory between the Old and New Chapels, and was connected to the New Chapel by a cloister walkway.  It was built in 1872-1873 and was enlarged in 1888, making it one of the older buildings still in existence on School grounds at that time. 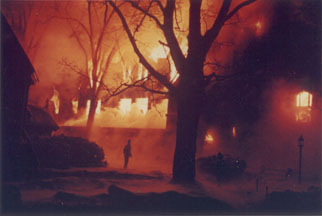 The following description of the event is from August Heckscher’s book, A Brief History of St. Paul’s School (pgs. 134-135; Ohrstrom Call # 373 Sa2HB):

“The night of January 21, 1961, was one of the coldest in New Hampshire’s twentieth century history, twenty-five degrees below zero.  That evening the school was gathered in Memorial Hall, absorbed in a film, Shake Hands with the Devil.  In the Big Study a lone master, the art teacher Bill Abbe, was in his apartment.  He noticed smoke rising through the hall outside.  He knocked at the doors of the few apartments carved from the labyrinth of old classrooms; finding no one there, nor anywhere else in the building, he called the fire department, gathered a few of his belongings, and made for the outdoors . . .

It was already too late to save the building.  Firemen battled against the insuperable odds of sub-zero temperatures, the water from their hoses freezing into grotesquely-formed icicles, while the interior became an inferno.  Late in the night, flames creeping unseen through a vault of the adjacent cloister were discovered by one of the boys, who, by giving the alarm, undoubtedly saved the chapel.  Awed by the fury of the conflagration, students, faculty, and all the school community stood silently in the arctic cold.”