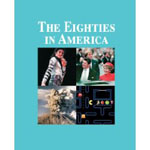 The Eighties in America edited by Milton Berman, Salem Press, 2008.

Read about: Fax machines, The Empire Strikes Back, Cyberpunk literature, Nintendo and the 1980’s Environmental Movement.

Helpful for research and fun for browsing!

Access the online version of this Reference set  (and the 1960’s decade version as well) by clicking  HERE.