Dunbarton Road, once called New Dunbarton Road, is undergoing construction as part of the site preparation for the building of the Lindsay Center for Mathematics and Science.  Rectory Road, the original Dunbarton Road, was once the main route from Concord to Dunbarton and beyond.  It wasn’t always the quiet roadway through the center of the grounds that it is today, and by the early years of the 20th century the increase in automobile traffic had become a menace.  The New Dunbarton Road was opened in June of 1920 as a way to re-direct traffic away from the center of  the grounds.

The images below were discovered in the Archives as part of a personal photo album given by an unknown donor.  The photo album consists of several dozen black and white photographs of construction at SPS during the first few decades of the 20th century. 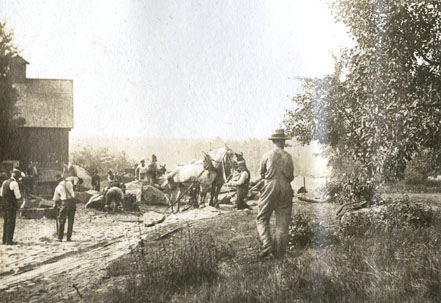 Clearing the way: A team of work horses is used to remove rocks from the road.  The corner of the Red Barn can be seen on the left. 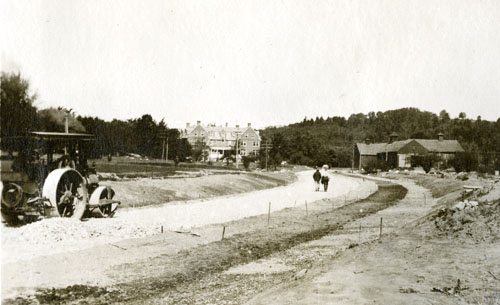 Grading the road:  Alumni House is on the left and the Red Barn is on the right. The view is looking toward the entrance to the School. 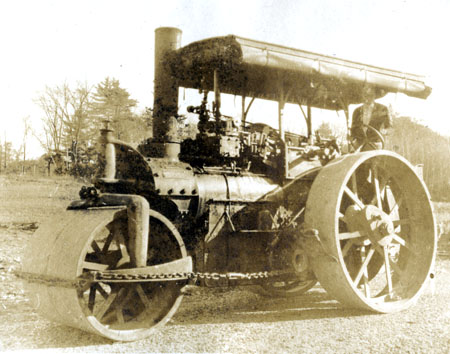 Heavy metal: A close-up of the steam roller seen the previous image.

Read more about the history of the New Dunbarton Road in this Fall 2008 Alumni Horae article (PDF file) by clicking HERE.