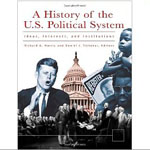 A History of the U.S. Political System edited by Richard A. Harris and Daniel J. Tichenor, ABC-CLIO, 2010.

Sections are titled as follows: