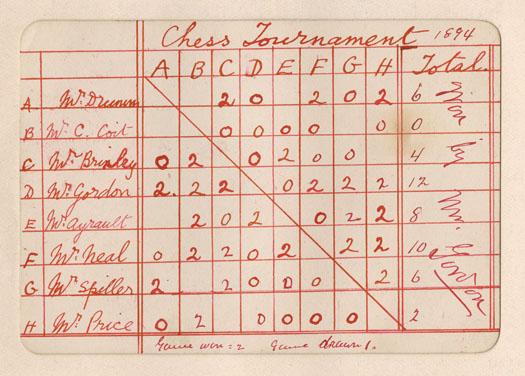 The Nugalia column in the February 22, 1894 edition of the Horae Scholasticae notes with unusual brevity:

A chess tournament is being played among the masters.

Pasted to the page preceding that issue, in a bound volume of issues from 1893-94, is the card with the scores for that tournament.  Carefully recorded in red ink on what appears to be a blank playing card, in the column marked “Total” are the words “Won by Mr. Gordon”.

This particular bound volume of the Horae Scholasticae has a label pasted to the cover identifying it as the personal property of Malcolm Kenneth Gordon who was a member of the Form of 1887  and a teacher at St. Paul’s School from 1889 – 1917. Gordon is best known for coaching hockey at SPS during a time when the game was imported from Canada and refined to create the basis for the American version familiar today. Apparently, he was also a very good chess player.

Other competitors in the chess tournament are listed as: Mr. Drumm, Mr. C. Coit, Mr.Brinley, Mr. Ayrault, Mr. Neal, Mr. Spiller, and Mr. Price.  It is interesting to note that poor Charles Wheeler Coit, the oldest son of the first Rector, Henry Augustus Coit, lost all of his chess games in the tournament. Coit’s loss provided the one win earned by Mr. Warwick James Price, member of the Form of 1889 and teacher of English from 1893-96. Robert Lawrence Spiller was a member of the Form of 1891 and taught from 1893-1895. The Rev. Thomas James Drumm was a Latin teacher here from 1874-1911.  Drumm, also the president of the School chess club, only managed to finish in a tie for fourth place with Spiller at six wins apiece. The Rev. Godfrey Malbone Brinley was a member of the Form of 1883 and a teacher from 1888-1930. Arthur DeLancey Ayrault taught at St. Paul’s from 1892 to 1896, and finished the tournament in third place with a total of eight wins.  The Rev. John Richmond Neal came to St. Paul’s to teach in 1892 and finished second to Gordon with a respectable ten wins.