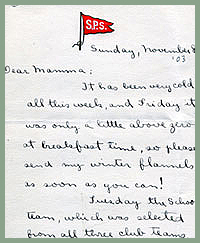 From the earliest days, almost from the School’s founding in 1856, members of the SPS community have documented their lives and the life of the School through diaries, letters and memoirs. The SPS Archives holds many examples of this living history, giving us a glimpse into the School as it was and as it has evolved over the years. The Rural Record, for example, is a daily handwritten journal begun in 1857 and continued by various faculty members for almost fifty years.  The daily happenings of the School, both momentous and mundane, including the temperature and weather conditions taken at three different times of day, were recorded in these journals.

Rectors and faculty members also kept personal diaries. For instance, Willard Scudder, Form of 1885, kept diaries that span almost his entire life, from 1893 up to his death in 1936, after forty-three years of devoted service to the School. We are fortunate that student letters from the past have also survived, such as the letters of George Farnam Brown, Form of 1906, who wrote home almost every week while he was a student at SPS from 1903 to 1906. Many SPS graduates have also written memoirs of their SPS experience. One notable example is Black Ice by Lorene Cary, Form of 1974.

No matter the format, these writings allow us to experience the SPS of the past and serve to give us a deeper understanding of the history and traditions that have shaped SPS today. These diaries, letters and memoirs remind us of the love and labor of those who came before us who cared deeply for the School, and who wished to preserve their memories of Millville. We are in their debt for capturing in words the past that informs us today.

See the new archives display – Millville Memories: Diaries, Letters and Memoirs from the SPS Archives – in the upper level gallery of Ohrstrom Library.

See the complete letter shown above – including transcription, on the Ohrstrom Library Archives website HERE.