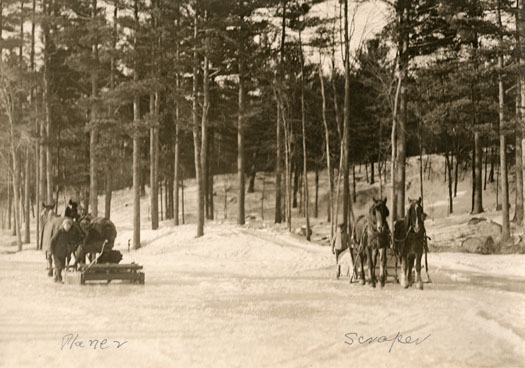 This photo was discovered in the St. Paul’s School Archives in a box among some of  the older hockey photos.  It shows two teams of horses pulling equipment, with workers guiding the process.  Someone has penciled in “Planer” and “Scraper” under the teams, and on the back of the photo is written “L S Pond. Clearing the ice.” also in pencil.  There is no date on the photo or any identifying details to help date this image, but horses were used to clear and shave the ice at St. Paul’s in this way at least into the 1950s when the first artificial hockey rink was built.

Richard B. McAdoo, SPS Form of 1938, wrote this recollection in his Autumn 1991 Alumni Horae article:

Early on, though, we were taught that the way to cope with a New England winter is to seize hold of the sport it has to offer. Chief among these for us was hockey. Once the roads had been cleared of snow, the teams of horses were guided onto the School Pond, where the ice was two or more feet thick, to plough the drifts off the hockey rinks. A team was then hitched to the ingenious blade —it was first developed here —which shaved a thin layer off the ice and left it smooth as glass for the afternoon’s games. Learning to skate was taken as much for granted as knowing how to multiply and divide.

With all the snow that has fallen so far this winter it is difficult to imagine having to clear all the roads around SPS and enough of Lower School Pond to hold at least six rinks using teams of horses instead of snow plows and snow blowers.  Think about those horses and the workers next time you are skimming across the ice, and all the hard work that has gone into maintaining this long-standing tradition at St. Paul’s School.