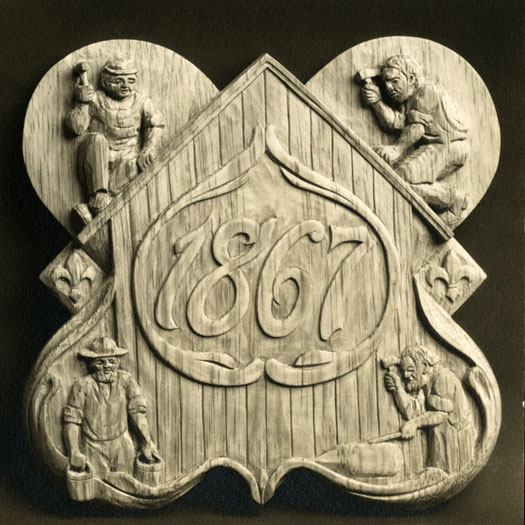 The Ohrstrom Library Digital Archive – OLDA for short – has some new images available from the SPS Archives for online viewing. A series of photographs have been digitized featuring forty-two of the Form plaques on display in the Coit Upper Dining Hall. The first nine plaques from the Forms of 1859 through 1867 have been added to the website this week and include descriptions of the symbols present in the designs as described by the carver, John Gregory Wiggins.

Wiggins was a teacher at St. Paul’s School from 1912 -1916, until he left to pursue a full-time carving career. Counted among his many ecclesiastical commissions are the carvings he created for the New Chapel – including the allegorical animals that adorn the pews in the choir room. Wiggins began carving Form plaques in 1921 and over the years he designed and carved the plaques for the Forms of 1858 through 1953.  These include all the plaques on display in the Coit Upper Dining Hall and the colorful heraldic shield plaques in the Upper Cloister.

In addition, you can follow the process of the creation of the Form plaque for the Form of 2011, as documented in the SPS Form Plaque Project blog and SPS Form Plaque Project Facebook page. This project is the result of the Form of 1973 Mentor Fellowship awarded to me last spring, and I will be carving the plaque over the summer that will be displayed in the Coit Middle Dining Hall when completed.  Over the next few years I will be carving additional Form plaques for the missing years going back to 1991 so that a cherished school tradition begun ninety years ago by John Gregory Wiggins can continue into the future.